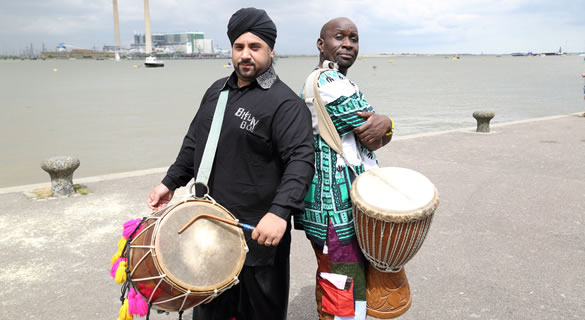 Preparations are at an advance stage for the 9th Tunbridge Wells Mela Festival which celebrates the diversity of the borough through music, food and dance which will be taking place on July 13 at the Calverley Grounds between 12.30pm and 6pm. The Mela has been organised in partnership by Cohesion Plus Kent, Sue Latham Events and the Kent Equality Cohesion Council with the support of Arts Council England.

Gurvinder Sandher the Artistic Director of Cohesion Plus commented “The artistic content for the Mela Festival I think is one of the strongest that we have had over the 9 years. We have managed to secure a range of culturally diverse acts showcasing some of the exciting talent which exists around Kent. I am particularly looking forward to showcasing our co-produced Afro-Bhangra Fusion piece which I believe will prove popular with the crowd, as well as the Mela Festival Gate which will feature prominently on the day. As ever I am very pleased with the support provided by Arts Council England who have invested in our artistic vision.”

Alongside the exciting stage programme there is also going to be a creative arts zone where our artistic partner Same Sky arts will be delivering arts workshops and there will be an opportunity to decorate the “Mela Festival Gate” which has been commissioned by Cohesion Plus as part of the Arts Council funded “Kent Mela Festival Project 2014”.

There is a still a funding short fall for the Mela, so if anyone would like to help please Text KECC11 followed by how much you wish to donate between £1 and £10 to 70070 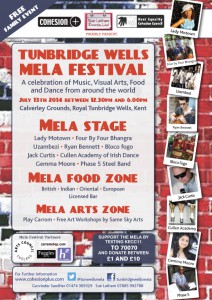