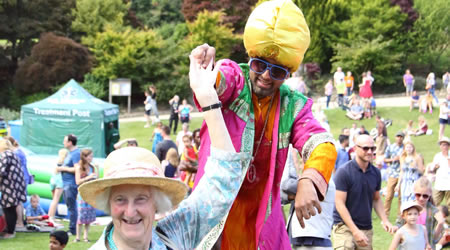 Cohesion Plus Summer and Autumn Programme – 2017

Cohesion Plus is pleased to confirm that as a result of a successful funding application to Arts Council England, we are now in a position to confirm our outline plans for 2017.

Our programme will start with the St Georges Day celebrations taking place in Gravesham and Dartford on April 21. This will be followed by the Fusion Street Festival in Gravesham on June 17 and the Tunbridge Wells Mela on July 9. Furthermore in recognition of 2017 being the UK – India Year of Culture, we will be producing a series of exciting collaborations working with Bollywood Brass Band, Nutkhut and Four by Four Bhangra for the summer.

Our autumn programme includes Festivals of Light in Gravesham, Dartford, Tunbridge Malling and Swale. We will be working with a number of key partners including LV21, Emergency Exit Arts, Same Sky Arts and Electric Cabaret on this element.

According to Gurvinder Sandher, Artistic Director of Cohesion Plus, “We are very grateful for the ongoing support being provided by Arts Council England, local authority and community partners which has allowed us to create an exciting programme of events for 2017 working across North and West Kent. We have a proven track record over many years of delivering innovative arts events which at their core promote cohesion and shared values working in areas which often have low levels of engagements in the arts. I very much look forward to delivering the Fusion Street Festival in Gravesham and the Festival of Light in Swale which are two new events in our portfolio”.