The 8th Dartford Festival of Light will take place on Friday October 21 between 6pm and 7.30pm. Organised by Cohesion Plus in partnership with Kent Equality Cohesion Council with the support of Dartford Borough Council and Arts Council England, the aim of the Festival is to bring the communities of Dartford together through the arts and promote key values of respect, excellence, friendship and equality.

The Festival this year is the most ambitious to date and is split into 3 distinct parts. Between 6pm and 6.30pm there will be entertainment on One Bell Corner as Phase 5 Steel Band where will be performing as will the Crocodile Brass on the High Street. Bloco Fogo will welcome train commuters at the station with their high energy Samba drumming performance.

12 local schools will then take part in a lantern parade starting around 6.30pm which will also involve the Four by Four Dhol Drummers, Bloco Fogo Samba, Crocodile Brass, Same Sky Arts and Stilt Walkers. The parade will be led by the Mayor of Dartford John Burrell, Artistic Director of Cohesion Plus Gurvinder Sandher and the Leader of Dartford Borough Council Jeremy Kite MBE and will start on One Bell Corner in the High Street. It will then go via Hythe Street, the Orchard Shopping Centre and Market Street to Central Park where it will climax by the Band Stand.

Once the Festival reaches Central Park after a series of short performances and presentations to the schools, there will be a spectacular fireworks and lights display to climax the celebrations delivered by the awards winning Phoenix Fireworks.

According to Gurvinder Sandher the Artistic Director of Cohesion Plus “I am really proud of how working with Dartford Borough Council we have been able to evolve the Festival of Light over the years. This year will be one of our biggest to date and is an excellent example of how the arts can be used to bring communities together. I am particularly delighted that some 650 young people in the borough will benefit from creative arts workshops in the build-up and will have the experience of taking part in a mass community arts festival. For many this will be their first direct experience of participatory arts.” 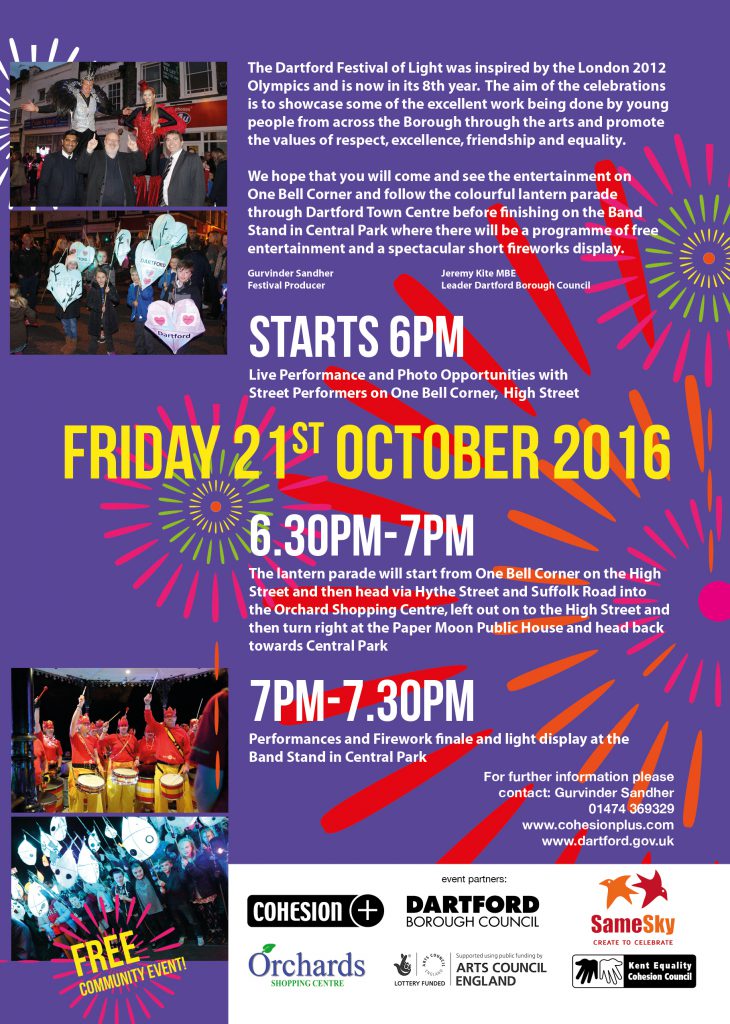