The annual Dartford Festival of Light which is now in its 9th year will take place on Friday October 20th between 6pm and 7.30pm. The aim of the Festival is to bring the communities of Dartford together through the arts and promote key British values of respect, excellence, friendship and equality.

The Festival is organised by Cohesion Plus in partnership with Kent Equality Cohesion Council with the support of Dartford Borough Council and Arts Council England,

Work has already taken place in the build up with artistic partners Same Sky Arts having delivered creative workshops in 9 local schools with some 450 young people from across the borough benefiting.

9 local schools will then take part in a lantern parade starting around 6.30pm which will also involve the musicians and stilt walkers. The parade will be led by the Mayor of Dartford Rosanna Currans, Artistic Director of Cohesion Plus Gurvinder Sandher and the Leader of Dartford Borough Council Jeremy Kite MBE and will start on One Bell Corner in the High Street. It will then go via Hythe Street, the Orchard Shopping Centre and Market Street to Central Park where it will climax by the Band Stand.

Once the Festival reaches Central Park after a series of short performances and presentations to the schools, there will be a spectacular fireworks and lights display to climax the celebrations delivered by the awards winning Phoenix Fireworks.

According to Gurvinder Sandher the Artistic Director of Cohesion Plus “I am very grateful for the ongoing support provided by Dartford Borough Council and local schools which has allowed the Dartford Festival of Light to become one of the key annual artistic celebrations in the Borough. I believe events like this are important not only to showcase the positive contributions the arts can make in bringing communities together but also as a means of celebrating our shared values which make Dartford the borough that it is.” 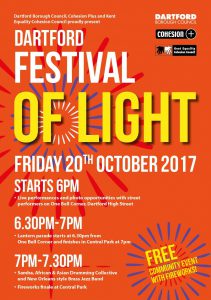 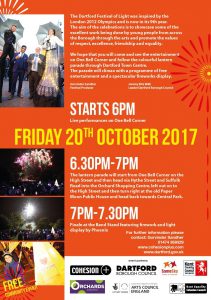