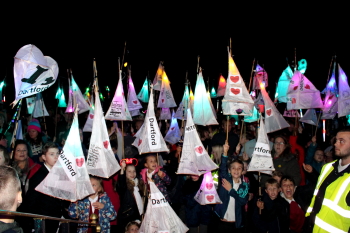 Lanterns, young people, music and creative arts were the order of the day at the 7th Dartford Festival of Light which took place on Friday October 23rd. Organised by leading arts organisation Cohesion Plus and Kent Equality Cohesion Council in partnership with Dartford Borough Council with the support of Arts Council England this year’s Festival was the biggest to date.

The aim of the Festival was to bring the communities of Dartford together through the arts and promote the key values of respect, excellence, friendship and equality.

In the build up to the event Same Sky Arts had been commissioned to work with 11 local schools to create colorful lanterns which the young people showcased on the evening. The lantern parade led by the Mayor of Dartford Cllr Ian Armitt, Council Leader Cllr Jeremy Kite and Gareth Johnson MP, started on the High Street before proceeding via Hythe Street, the Orchard Shopping Centre and Market Street to Central Park. The parade which involved some 500 young people with lanterns also featured the Four by Four Dhol Drummers, Crocodile Brass and Stilt Walkers.

Once the colourful spectacle reached Central Park there was a programme of entertainment which was hosted by comedy duo Payne and Pearce which featured performances of Samba, Bhangra and Brass. This was followed by presentations to local schools to commemorate their participation. The festival climaxed with a spectacular fireworks display which was enjoyed by the large crowd which had gathered in Central Park.

According to Gurvinder Sandher the Artistic Director of Cohesion Plus who co-ordinated the event “I was very overwhelmed by the positive support we received for the Festival and the excellent feedback from members of the public. The whole ethos of the Festival was to bring communities together and celebrate what binds us together as a community and I believe this was achieved. We are very grateful for the on-going support provided by Dartford Borough Council and Arts Council England without which the Festival would not have been possible.