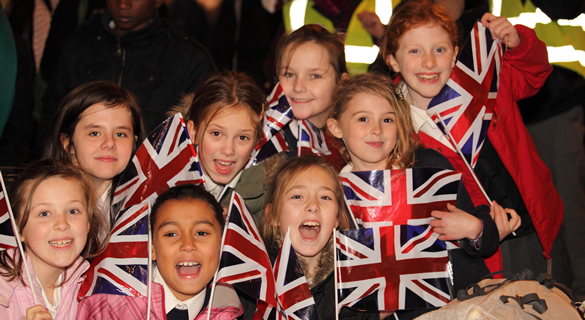 Cohesion Plus Kent are proud to present working in partnership with Dartford Borough Council and Kent Equality Cohesion Council the fifth Dartford Festival of Light which will take place on Friday October 25.

The first part of the event will feature a schools parade through Dartford Town Centre between 6.30pm and 7pm starting in the Orchards Shopping Centre before heading left onto the High Street to Dartford Central Park where it will climax at the Bandstand. The parade will involve 11 schools from Dartford who will be working with renowned arts company Samesky in the build up to the event. In total over 550 young pupils will benefit from arts workshops. The children will make lanterns and torches which they will carry in the parade. They will be accompanied by the Bloco Fogo Samba Group and the Four by Four Dhol Drummers.

The second part will feature Kent based Comedy Duo Danny and Dan performing at the Bandstand in Central Park between 7pm and 7.30pm as well as presentations to each school.

According to Gurvinder Sandher the Artistic Director of Cohesion Plus Kent “We have had another great response from local schools and our partners. The event in Dartford has grown each time it has been held and this year I am pleased that in addition to the parade we had added a comedy element at the end with local act Danny and Dan. I am very grateful for the on-going support of Arts Council England whose support has allowed our vision to become a reality in terms of arts delivery in North and West Kent.”