The fourth Dartford Festival of Light has been re-scheduled for Friday November 23rd following poor weather in October led to the original event being cancelled.

The event will feature a parade involving 9 local schools and some 400 pupils who will depart from the green opposite Dartford Central Library around 4.30pm before heading into the High Street walking past the Paper Moon Pub before climaxing on One Bell Corner. The participating schools will then be presented with trophies by the Mayor of Dartford Cllr. Ann Allen. The parade will also feature popular local groups Bloco Fogo Samba and Dhol Drummers from the Four by Four Bhangra Youth Club and DJ Stan Lee King will be playing popular hits on One Bell Corner between 4pm and 5pm.

The aim of the festival is to celebrate the great British Year which has included the Diamond Jubilee, Olympics, and the Paralympics and the British values of respect, excellence, friendship and equality.

The Festival of Light has been organised by Cohesion Plus in partnership with Kent Equality Cohesion Council with the support of Dartford Borough Council, Arts Council England and Kent County Council.

According to Gurvinder Sandher the Artistic Director of Cohesion Plus Kent who has led on the organisation of the event “We were very disappointed with having to cancel the original event in October due to the bad weather. Everyone had worked very hard in the months leading up to the event including the school children. We are therefore very pleased following talks with our partners Dartford Borough Council and Arts Council England to be in a position to reschedule the Festival. I am delighted that nearly all the schools who were due to take part on the original date have agreed to take part and we hope that by starting the celebrations earlier more people in Dartford will be able to come and enjoy the spectacle of music, colour and light.” 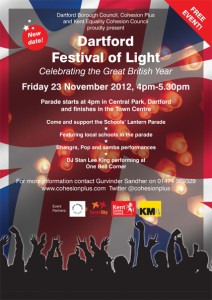