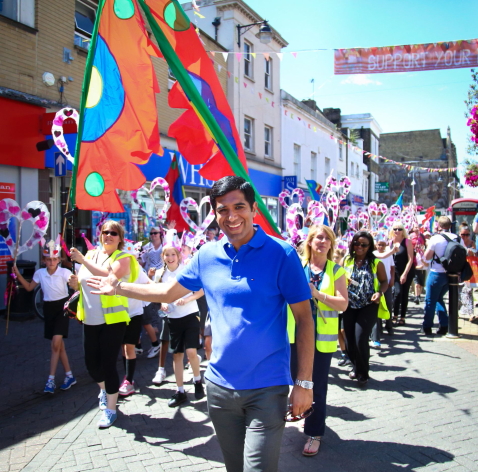 Sun, Samba, and smiles were the order of the day at the first ever Dartford High Street Carnival of Summer which took place on July on Friday July 10. The aim of the Carnival was to celebrate the rich heritage of Dartford, to celebrate the High Street and provide an opportunity for the 275 children from 4 local schools to learn new skills around costume and prop making.

The Carnival organised by Cohesion Plus in partnership with Kent Equality Cohesion Council and Dartford Borough Council with the support of Arts Council England commenced in Central Park by the Bandstand between noon and 1.30pm where the children gathered to have pack lunches and enjoy entertainment by the Steel Ambition Calypso Band, Four by Four Bhangra Group, Rhythm of the City Samba and children’s entertainer Ant Payne.

The children from Our Lady’s Catholic Primary, Fleetdown Primary, Westgate Primary and Temple Hill Primary who had been working with the Great British Carnival Company in the build up to the event showcased some colourful creative art which focused on the history of Dartford and in taking pride in the Borough. The Carnival got bigger as it collected people along the way as it went from Central Park, via the High Street before returning to back to Central Park.

Once the carnival arrived back each child was presented with a special medal to thank them for their participation.

Gurvinder Sandher the Artistic Director of Cohesion Plus who organised the event commented “I am really pleased with what we have managed to achieve with the Carnival in this first year. There was great excitement in the High Street as the entertainment and carnival passed and I would like to build upon this success working with Dartford Borough Council for next year. We very fortunate to have some great artists and arts organisations involved with the carnival and we were able to produce a high quality event which the community of Dartford were able to enjoy. Events like this not only showcase local artistic excellence but they also bring communities together to enjoy shared experiences.”