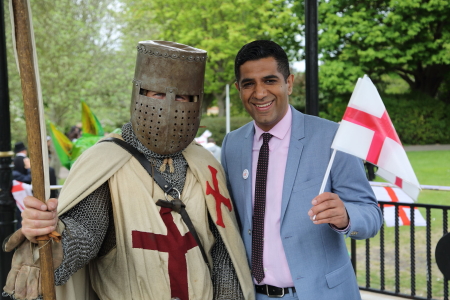 The annual Saint George’s Day Parade and celebrations took place in Dartford on Friday April 21. 500 Children from 10 local schools took part in the event which was organised by Cohesion Plus in partnership with Kent Equality Cohesion Council supported by Dartford Borough Council in what were some of the biggest celebrations taking place in England. The aim of the event was to celebrate the patron Saint of England and bring together the diverse communities in Dartford to celebrate this important day.

Before the procession started there was entertainment on the High Street with performances by the West Hill Morris, Premier Brass Band, Big Fish Arts and the Bollywood Brass Band which attracted a large crowd.

The Schools gathered outside the Civic Centre where the parade led by Saint George himself started. Along with the schools the parade also featured special guests the Mayor of Dartford, Cllr Burrell and Gareth Johnson MP as well as performances by the Brass Bands, Four by Four Dhol Drummers, Stilt Walkers and comedy medieval jesters and Shakespearian actors.

The parade climaxed in Central Park by the Band Stand where the 500 school children sang Happy 91st Birthday to HM The Queen before watching a short programme of entertainment which climaxed with the Premier Brass Band playing Land of Hope of Glory and the National Anthem.

Gurvinder Sandher the Artistic Director of Cohesion Plus who led on the organisation of the celebrations commented “I am proud of what we were able to achieve working in partnership with Dartford Borough Council and local schools. There was a great vibe in the town centre and we were able to show how the arts can play a positive role in bringing communities together to celebrate events like Saint George’s Day. I am also very grateful to Same Sky Arts our principal artistic partners and LV21 for their excellent work on the evaluation which captured the positive energy of the members of the public in attendance.”