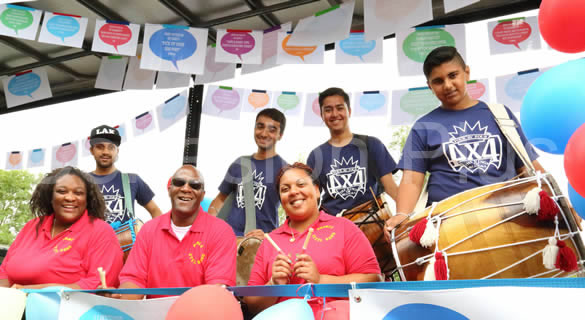 The Northfleet Carnival was one of the biggest to date with 36 floats including one put together by Cohesion Plus working with LV21 and the Grand Project which promoted creative arts around the “Six Ways to Well Being” and featured performances by the Phase 5 Steel Band and Four by Four Dhol Drummers. Cohesion Plus also arranged workshops in local schools in the build-up for some 200 young people to create visual arts displays which were used on different floats in the carnival. These were delivered by creative artistic partners Same Sky.

Once the Carnival was in full swing Cohesion Plus then headed to the Gravesend Promenade where the “Gravesham Riverside Festival” took place. Working in partnership with Gravesham Borough Council this festival under different names has been going for over a decade and its primary focus is to use creative arts, music and dance to bring the diverse communities of the borough together. Acts at this year’s event included Killer Queen, local band The Tonics and bhangra stars Angrez Ali and Sunny Hayre. In addition to the stage programme there were 3 big top marquees which featured different performances and arts workshops.

Gurvinder Sandher the Artistic Director of Cohesion Plus commented “I am very pleased with how the day has gone. We had thousands in attendance and great credit needs to be given to our partners Gravesham Borough Council and the Northfleet Carnival Committee and all their volunteers for making it such a memorable day. This was a great opportunity to showcase creative and performing arts to a large audience and helped underline how the arts can be used to bring diverse communities together. We hope next year with the support of Arts Council England we can build upon the success of this year.”