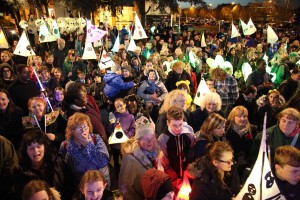 A colourful lantern parade inspired by the hit 1970’s song by Wizzard ““I wish it could be Christmas Everyday” launched the Festive celebrations in Gravesham on November 13. Organised in partnership by Cohesion Plus, Kent Equality Cohesion Council and Gravesham Borough Council the parade featured 13 local schools with over 1500 people taking part including 600 school children who made lanterns in the build up to the celebrations working with Same Sky Arts.

The Parade which was led by the Mayor of Gravesham Councillor Michael Wenban along with local councillors and representatives from Cohesion Plus started in the Saint George’s Shopping Centre. The Christmas lights were lit up in the Town Centre as the parade passed through New Road and Windmill Street before ending at the Community Square. There the thousands in attendance were entertained by the cast of the forthcoming Gravesend Pantomime “Robin Hood” before the Christmas Lights were switched on. 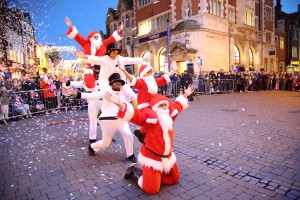 The Dancing Santa’s a new production by Cohesion Plus working with Four by Four Bhangra proved to be a particular highlight wooing crowds on New Road with a unique performance fusing the cultures of east and west. The Dancers performed to a special bhangra fusion mix of “I Wish it Could be Christmas Every day.”

Gurvinder Sandher the Artistic Director of Cohesion Plus commented “I was very pleased with what we were able to achieve. It was a great pleasure to see so many people from the diverse communities of the borough joining in with the celebrations. It is events like this which make Gravesham so unique and highlights what binds us together as a community at a time of heightened tension around the world. The Dancing Santa’s proved to be popular and showcased all that we are trying to do as an organisation by pushing the artistic boundaries as much as we can.”