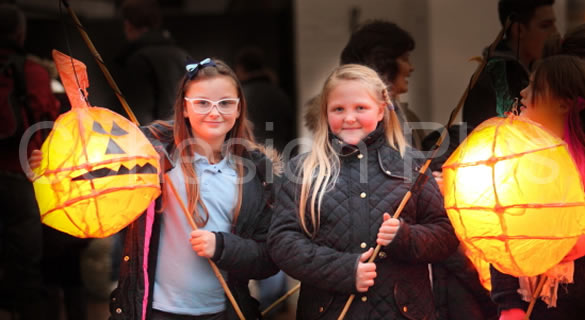 The Festival featured a lantern parade which underlined the light element of the Festival followed by a Fusion stage show which showcased music and dance from around the World.

The lantern parade which was led by the Mayor of Tonbridge and Malling Cllr Sasha Luck and the Vice Chairman of Kent County Council Cllr Mike Harrison with invited guests lit up the village as some 500 people took part. The children had worked with our artistic partners Same Sky in the build up to the event.

Once the parade reached Wrotham Cricket Ground which had been lit up spectacularly with lights there followed a stage programme which featured comedy duo Danny and Dan, Reel Eire Irish Dance, Four by Four Bhangra Group and vocalist Ryan Bennett. The event was climaxed by a fire display which was delivered by Phoenix.

Gurvinder Sandher the Artistic Director of Cohesion Plus commented “This year’s event built upon the success of last year’s Festival and I felt that the artistic quality was very good. We were able to not only showcase creative visual arts both during the parade and at the cricket Ground but also have an exciting stage programme which had the audience engaged from the beginning. We are very grateful as ever to all our partners and look forward to developing the festival even more artistically next year.”

Wrotham Festival of Fusion and Light

We hope that you enjoy a short form of the Wrotham Festival of Fusion and Light which underlined how visual and creative arts can engage young people and their families in rural communities.