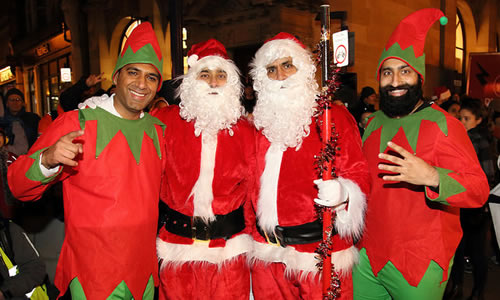 Thousands of people filled Gravesend Town Centre to enjoy a celebration of music, dance and light on Friday November 18 as the Christmas celebrations started in Gravesham.

Cohesion Plus working in partnership with Kent Equality Cohesion Council and Gravesham Borough Council supported by Arts Council England organised the Gravesham Festival of Christmas Lights element of the Gravesham Christmas Lights Switch on. This featured 12 local schools and a parade of over 1200 people from across the borough. They were accompanied by Christmas Mime Elves, Santa and his helpers on stilts, Bloco Fogo Samba, Crocodile Brass Band, the Black Knights and the Four by Four Dhol Drummers.

In the build up to the event some 550 young people from across the borough benefited from free creative arts workshops working with Same Sky Arts on the Christmas Lanterns.

The Cohesion Plus produced “Dancing Santa’s” performance in the Town Centre a unique fusion of bhangra and contemporary dance to a special bhangra mix of popular Christmas hit “Merry Christmas Everyone” performed by Four by Four Bhangra and 30 pupils from Saint George’s School proved to be popular with the large crowds.

The parade led by the Mayor of Gravesham Cllr Greta Goatley started off from the St George’s Shopping Centre and went through New Road, up Windmill Street and culminated on Community Square where the Christmas Tree was switched on following performances by the Gravesham Pantomime Cast of Jack and the Beanstalk.

Gurvinder Sandher the Artistic Director of Cohesion Plus who organised the parade said “I am so pleased with what we were able to achieve. I am grateful to our partners, the local community and all the schools who came along and supported the celebrations. It is important to use celebrations like Christmas to bring all communities together and celebrate as one. The positive energy in the town centre made all the hard work worthwhile. Our new Dancing Santa production also proved to be popular and underlines the work we are doing around pushing the boundaries of bhangra dance and fusing it with different styles and putting into new contexts.”