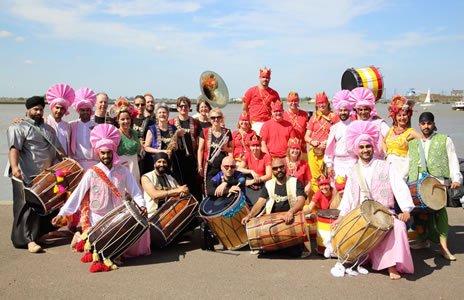 The Sun shone on the 3rd Fusion Festival which attracted a large family crowd to the Riverside Leisure Area on July 4 to enjoy performances and creative arts workshops as well as food from around the world.

The Festival which was organised by Cohesion Plus and Kent Equality Cohesion Council with the support of Gravesham Borough Council provided to be popular and saw a number of new and emerging acts performing including local band What, a drama by young children from Gravesham especially prepared for the festival by 2B Scene Theatre Company, leading African vocal ensemble Uzambezi, Bulgarian folk group Kitka, emerging vocalist Sarika Gill and Slovakian band Gejza.

The festival also say the premier of “Samba Bhangra Beats” an exciting new performance co-produced by Cohesion Plus working with the Bollywood Brass Band, Gravesham’s very own Four by Four Bhangra Group and Bloco Fogo Samba. This proved to be a particular highlight and underlined the theme of the Fusion Festival to use the arts bring communities together and promote cohesion and understanding.

In addition to the stage programme there was some exciting creative arts taking place off stage which was delivered by LV21 Arts which proved to be very popular with their changing audiences interactive piece while Nutkhut performed a series of walkabouts dressed as Bollywood stars on stilts, getting members of the audience up and dancing.

Gurvinder Sandher the Artistic Director of Cohesion Plus commented “I am delighted with what we have managed to deliver for the Fusion Festival this year. A lot of hard work and months of preparation go into organising an event like this so it was very pleasing to see so many people come out and enjoy the Festival and have a great family day out. I was especially encouraged with the positive response that we had for our new piece of work Samba Bhangra Beats which proved to be very popular. I am also very pleased that with the ongoing support of Arts Council England, Gravesham Borough Council and KCC Arts Development Unit we have been able to create an innovative event with some great art taking place both on and off stage which is growing year by year.”