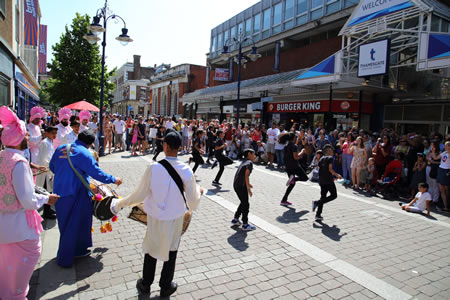 Sun, Jazz, Calypso, Bhangra, Bollywood, Irish Dance, Eastern European Folk and street art were on the menu at the Fusion Festival which took place across Gravesend Town Centre on Saturday June 17, proving to be popular with shoppers. They were able to witness a range of performances at key locations in the Town Centre including the Market, Clock Tower, High Street, Windmill Street, New Road and King Street. The aim of the festival was to bring together the communities of the borough through music, dance and visual arts and celebrate all that binds us together. The festival was organised by Cohesion Plus working in partnership with Kent Equality Cohesion Council supported by Gravesham Borough Council and Arts Council England.

The weekend of the festival also marked the first anniversary of the murder of Jo Cox MP and this was marked up and down the Country with a series of events under the umbrella of “The Great Get Together”. As part of the Festival a special event took place in the Gravesend Market which was attended by the Mayor of Gravesham Cllr Harold Craske along with members of the local community who brought along different food to share.

Performers at the festival included the Bollywood Brass Band, Four by Four Bhangra, Reel Eire Dance, Electric Cabaret Street Artists, Phase 5 Steel Band, Kitka Bulgarian Folk, Jazz Swingtett and the Nutkhut Stilt Walkers. Free visual arts workshops also took place for young people in the Town Centre which were led by LV21. The festival also saw the first performance of the new Cohesion Plus Production “Bhangrawood” which was performed by the Bollywood Brass and Four by Four Bhangra. The production is a unique collaboration which showcases the genres of Bollywood and Bhangra through street performance and also celebrates 2017 being the UK-India Year of Culture.

Gurvinder Sandher the Artistic Director of Cohesion Plus commented “I was very pleased with the response that we have had to the Fusion Festival. This was a new departure for us to organise a pop up street festival and it was so pleasing to see the smiles on people’s faces as the performances took place and the feedback we received from members of the public. I am keen to build upon this year’s success next year and make the event even bigger so that we can attract people from further afield. Our new production of Bhangrawood also had its first outing and the feedback we have had is very encouraging and is an example of how our work has evolved over the years.”