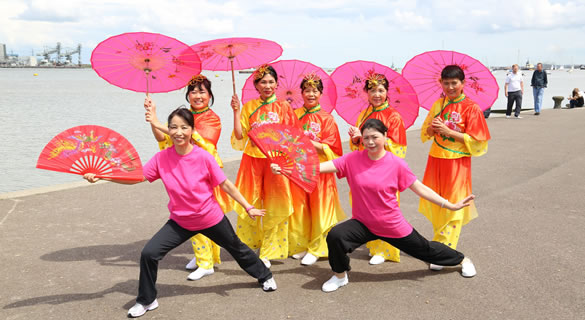 Cohesion Plus in partnership with Kent Equality Cohesion Council with the support of Gravesham Borough Council and KCC Arts Development Unit delivered the highly successful Fusion Festival which took place on Saturday June 28 at the Gravesend Promenade. The aim of the free festival was to showcase new and emerging culturally diverse artists from Kent and to celebrate music and dance from around the world.

The stage programme featured a number of Gravesham based acts including singers Ryan Bennett and Gemma Moore, as well as the ever popular Four by Four Bhangra who performed an exciting new set alongside leading African Arts Company Uzambezi which received a very positive response from the audience. Other performers included the Phase 5 Steel Band, the Cullen Academy of Irish Dance, Ying Tang Chinese Association and Piwnica pod Aniolami a popular Polish cabaret act.

In addition to the stage performers there were also arts workshops being ran by Same Sky Arts which proved popular with young people, the launch of the Mela Festival Gate which is touring the County appearing at all the different events being organised by Cohesion Plus this summer as well the 168th Town Regatta and heats for England’s Most Powerful Man.

Gurvinder Sandher the Artistic Director of Cohesion Plus commented “I am very pleased with how the Fusion Festival went. This was our first event of our summer and autumn programme and the response I have had from artists, partners and people who attended has been positive. We delivered an excellent culturally diverse programme which showcased new and emerging talent, in addition the arts workshops taking place also proved to be popular as did the Mela Festival Gate which we will be touring with to all our events. I was especially pleased with the fantastic reception given to the Afro-Bhangra fusion piece which we co-produced and look forward to showcasing this performance through the summer and autumn. I am very grateful to our partners especially Arts Council England, KECC, Gravesham Borough Council and KCC Arts Development Unit for allowing our vision for this event to become a reality.”