The annual Saint George’s Day Parade and celebrations took place in Gravesham on Friday April 22. 700 Children from 15 local schools took part in the event which was organised by Cohesion Plus in partnership with Kent Equality Cohesion Council supported by Gravesham Borough Council in what were some of the biggest celebrations taking place in England. The aim of the event was to celebrate the patron Saint of England and bring together the diverse communities in Gravesham to celebrate this important day.

Before the procession started there was entertainment in the town centre with performances by the Premier Brass Band and the Bollywood Brass Band which warmed up the gathering crowd. The parade led by Saint George himself who was played by Gravesham resident Russel Palmer started outside Saint George’s Church. Along with the schools the Parade also featured special guests the Lord Lieutenant of Kent The Viscount De L’Isle and the Mayor of Gravesham Cllr Wenban as well as performances by the Brass Bands, Four by Four Dhol Drummers, Stilt Walkers and comedy medieval jesters Payne and Pearce. The Parade went up the High Street into King Street, through Saint George’s Shopping Centre and then head back through town before finishing on Community Square. Throughout the parade members of the public waved their flags of Saint George and encouraged the children as the parade went by.

Once the parade climaxed on Community Square the 700 school children sang Happy Birthday to HM The Queen before listening to the Lord Lieutenant who is the Queen’s representative in Kent thank everyone for their participation. Following some further entertainment the flags of Saint George were raised and three cheers shouted for the Patron Saint of England.

Gurvinder Sandher who led on the organisation of the celebrations commented “I was very pleased with what we were able to achieve working in partnership with Gravesham Borough Council and Arts Council England. There is great support for Saint George’s Day here in Gravesham and it was so pleasing to see the local community come out and support the event and to see so many people wave the flag of Saint George made me proud. I really think other towns could learn a lesson from what we are doing here and use events like Saint George’s Day to bring all the different communities together as one regardless of faith or ethnicity.” 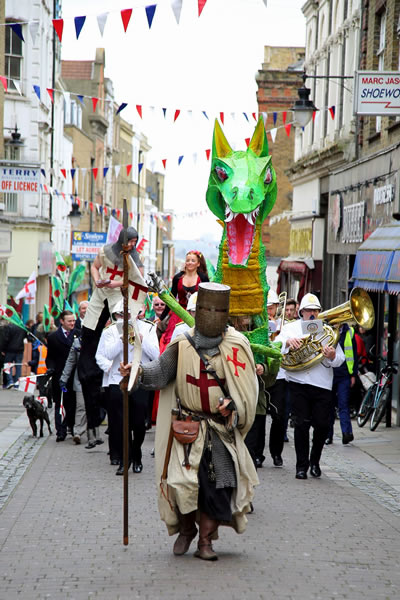