Cohesion Plus will once again be working in partnership with Maidstone Cultural Group and Maidstone Borough Council to deliver Lunar New Year celebrations in Maidstone Town Centre on Saturday 28th January. This year sees the ushering of the Year of the Rabbit.

Celebrations will take place between 11am and 1.30pm on Jubilee Square and in Week Street. The celebrations will kick off outside the Old Town Hall where the dotting of the eyes ceremony will take place. The ceremony is an ancient tradition that awakens the Chinese Lions and effectively welcomes in the New Year. The ceremony will be conducted by the Mayor of Maidstone Cllr Derek Mortimer alongside representatives from the local community led by Michael Lam the proprietor of Kala Red Oriental Bar. In addition there will also be performances from the London Chinese Opera Studio, SOAS Chinese Music Ensemble and Sichuan Changing Face and Ribbon Dance Puppets.

Gurvinder Sandher MBE DL the Artistic Director of Cohesion Plus commented “We are pleased to be working in partnership to once again celebrate the Lunar New Year and celebrate with the diverse communities of Maidstone. It is a wonderful thing to be able to celebrate traditions and events from around the world to acknowledge the fact that we live in a diverse and vibrant UK. Its also an opportunity to showcase how arts and culture can not only bring communities together but also drive footfall in the urban town centres and public spaces. We have always had good support for this particular event and we hope that this year is no exception.” 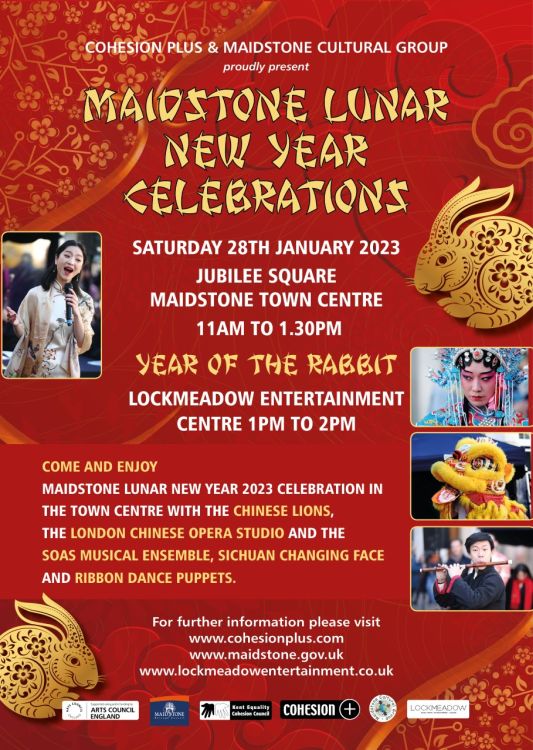