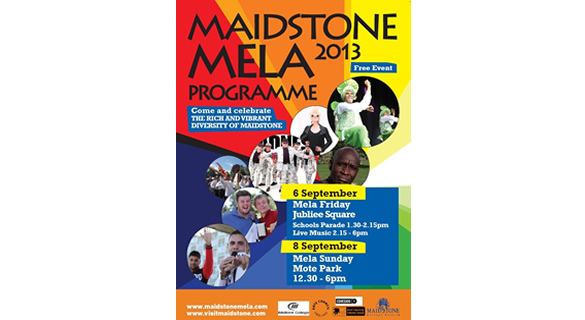 Preparations are at an advanced stage for the 11th Maidstone Mela which is taking place over 2 days on Friday September 6 in Maidstone Town Centre and on Sunday September 8 in Mote Park. The Mela is organised in partnership by Cohesion Plus, Maidstone Borough Council, Kent Equality Cohesion Council and Maidstone Mela Advisory Group which is made up of local community groups.

Friday September 6 will see the biggest Maidstone Mela Launch Parade to date take place with 9 local schools and some 500 local pupils taking part. The parade will depart from County Hall at 1.35pm; go along Week Street into Fremlin Walk before finishing on Jubilee Square just after 2pm. The children will be accompanied by culturally diverse artists including Bloco Fogo Samba, Four by Four Dhol Drummers, Lucky Moyo African Drummers and the Maidstone Grammar Girls Samba.

The children have been working with renowned arts company Samesky in the build-up to the Parade making flags and visual creative arts pieces which they will showcase on the day. The parade will be led by special guests from Maidstone Borough Council and Kent County Council.

Once the Parade gets to Jubilee Square there will be a full stage programme between 2.15pm and 6pm including a range of culturally diverse artists including the Emerald Steel Band, Maidstone Nepalese Community Group, exciting local singing trio Imminent and the stage programme will be climaxed by Georg Tormann who will be performing as Michael Buble and Get the Party Started a Tribute to Pink.

Gurvinder Sandher the Artistic Director of Cohesion Plus commented “We are so pleased that working in partnership with Maidstone Borough Council that we have developed an exciting stage programme which will showcase new emerging talent much of which is based in Kent. We are always striving to move the Mela forward and to this end we are very pleased that so many local schools have taken up our offer to take part in the Mela Parade. The Mela is a well-established event now in Mote Park but we hope through organising a large parade and the stage programme in Jubilee Square that we can start to build up the presence of the Mela in the Town Centre as well, promoting the work of diverse artists to a wider audience. As ever I am very grateful to the on-going support of our partners Maidstone Borough Council and Arts Council England for helping make this vision a reality.”