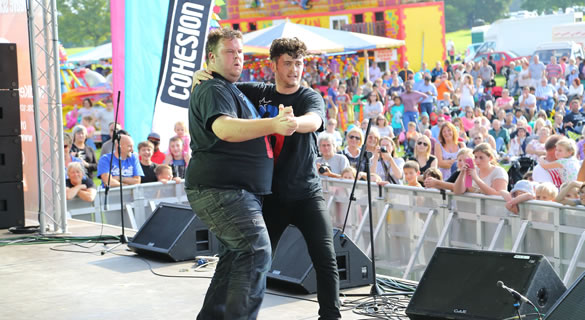 The 12th Maidstone Mela which is organised in partnership by Cohesion Plus, Maidstone Borough Council and Kent Equality Cohesion Council with the support of Arts Council England attracted record numbers to what is now the largest culturally diverse arts festival in Kent. The celebrations commenced on the Friday with the Mela Carnival Parade which went through Maidstone Town Centre and involved 7 local schools and around 350 young people alongside the Bloco Fogo Samba Group, Same Sky Arts, the Maidstone Grammar Schools for Girls Samba Group and the Four by Four Dhol Drummers. The parade was led by the Deputy Mayor of Maidstone Councillor Daniel Moriarty and Kent County Council Chairman Councillor Peter Homewood.

On the Sunday the entertainment moved to Mote Park where in excess of 12,000 enjoyed a day of music, dance and food from around the World. The Mela was officially opened by the Mayor of Maidstone Councillor Richard Thick and the High Commissioner for the Bahamas Eldred Bethel. The stage programme a number of local acts including the Phase 5 Steel Band, Kerala Cultural Association, Reel Eire Dance, Bollywood Blast and the Maidstone Nepalese Community Group. Particular highlights were the performances by comedy duo Danny and Dan and the Cohesion Plus produced “Afro-Bhangra” Fusion which was performed by Four by Four Bhangra and Uzambezi Arts. The Mela was brought to an exciting climax by the headline act Soul star Ruby Turner.

In addition to the stage programme there were over 25 food stalls serving delicacies from around the World as well as interactive arts workshops for children and information stands.

Gurvinder Sandher the Artistic Director of the Mela commented “I have been working on the Mela since its inception in 2003 and this year was our biggest attendance to date. I am really proud of our artistic programme both on stage and the free arts workshops that were available on site. Great credit needs to be given to our partners Maidstone Borough Council who have continued to support the Mela and have worked with us to develop it artistically. I would also like to thank the Mela Advisory Group for their continued advice and support, the strength of the Mela lies in the support that we receive from the local community and we hope to be back next year even bigger and better.”