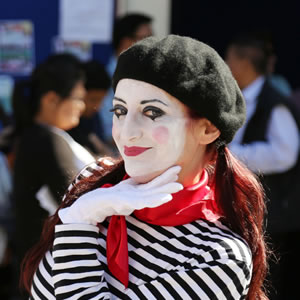 In addition there were free creative art workshops for children making badges and hats around the theme of the Mela which were delivered by LV21 and Same Sky Arts. The street mime artists, stilt walkers, human statues also proved very popular with the crowds as they toured the Town Centre.

According to Gurvinder Sandher from Cohesion Plus who organised the artistic element of the Street Mela, “I’ve been involved with the Mela since its inception in 2003 and have watched it grow over the years. I hope that next year we will be able to return to Mote Park but understand and appreciate there is a process that we need to go through. In that context I was pleased to be able to arrange something although much smaller than previous years in Maidstone to celebrate music and dance from around the world. The feedback we received on the artistic content for the street Mela was positive and I hope to use this model of arts delivery in other parts of Kent. I look forward to working with Maidstone Borough Council and partners on the future evolution of the Mela here in Maidstone working in partnership with the local community.”

Alongside the entertainment Maidstone Borough Council ran a consultation on the future direction of the Mela and other community events. The consultation will continue through to mid-October, and it will form the basis of a report to the Heritage, Culture and Leisure Committee later this year.