Cohesion Plus and Festive Road are proud to announce a new show titled the ‘Dancing Maharajas’ which is currently in development stage. The first test performances are due to take at the Gravesham Fusion Festival on June 15th and the Tunbridge Wells Mela Festival on July 7th. Further work will then place during the summer for a series of performances in October linked to Diwali celebrations in the South East.

Inspired by the true story of Maharaja Ranjit Singh, the show aims to captures the opulence, colour and vibrancy of the Sikh empire in India. Accompanied by Dhol drummers and flute players, the Maharaja will enter the festival on his elephant alongside his royal entourage, wearing full authentic colourful costumes, interacting with members of the audience before bursting into a choreographed dance piece which the Maharaja’s elephant will mimic with her trunk and ears. The piece will be performed by British born Asian artists from migrant backgrounds, who will present their own interpretation of traditional Bhangra Folk dance and music.

The show is jointly produced by Cohesion Plus and Festive Road with choreography from Bill Singh and will feature renowned dance company Four by Four Bhangra. The new production will be flexible so that it can be performed at both outdoor parades and festivals and the work is being funded by Arts Council England and Milton Keynes Council.

Gurvinder Sandher, Artistic Director of Cohesion Plus commented, “This is a really exciting development. I believe the show once it is fully ready will bring town centres and festivals to a standstill with its energy, vibrancy and colour. We have already spent a lot of time developing the choreography so that there is interaction between the performers, elephant and the public. This is ground breaking piece of work for us and we look forward to working in partnership with Festive Road to showcasing it around festivals in the UK.”

Martine Frost, Executive Director at Festive Road stated, “This is a great opportunity for us to merge our visual art form with a choreographed performance element to create a show which we believe will leave a lasting impact on those who have the opportunity to witness it. This is a new partnership for us with Cohesion Plus and we look forward to working with them to make our vision a reality.” 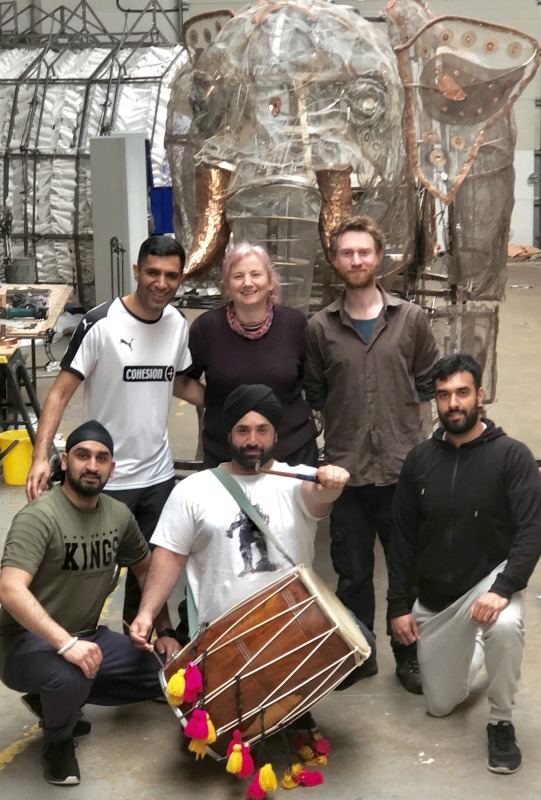