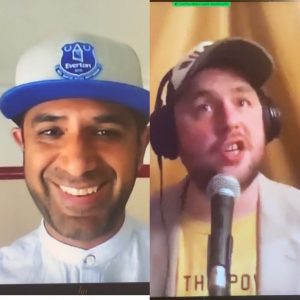 Cohesion Plus were pleased to deliver an online Comedy Night in partnership with Counterpoint Arts on Monday 16th November which saw a hilarious line up of comedians. The event was hosted by Tom Parry and saw performances from The Chuckle Singh’s and comedians from the No Direction Home Collective as well as Cohesion Plus Artistic Director Gurvinder Sandher.

The comedy night was headlined by Geoff Norcott, star of the Mash Report and Mock the Week. Cohesion Plus’s proceeds from the event will be donated to local food banks in the lead up to the festive period.

Gurvinder Sandher, Artistic Director of Cohesion Plus commented, “It’s important that we continue to look on the bright side of what has been a challenging year to say the least. We were keen to offer an evening of laughter over Zoom where the money raised could go to a worthy cause. Going into the festive period, this Christmas is going to look very different to the ones we are used to, especially for those who are struggling financially. As such, we wanted to deliver a comedy night to not only share a few laughs but also help our local food banks. The comedy night also goes to show that whilst we are the midst of a pandemic and a second nationwide lockdown, the arts can still have a positive impact upon all of us. We are incredibly grateful to our partners Counterpoint Arts for inviting us to take part and help deliver such a great event.”