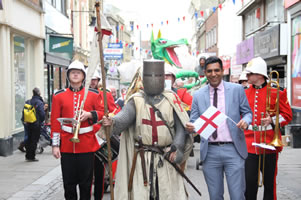 The celebrations in Gravesham will take place between 10am and 11.30am and in Dartford from 12.30pm to 2.30pm. Entertainment including Premier Brass Band, Brass Volcanoes, Folkin Fusion Drumming Collective, West Hill Morris, Saint George’s themed Stilt Walkers, a Saint George in full armour and a large scale dragon will feature.

The highlight of the celebrations will be the school parades which will feature 20 local schools and 1000 young people from across the boroughs and will be working with our artistic partners Same Sky to create pieces of visual art which they will display in the parades.

Gurvinder Sandher the Artistic Director of Cohesion Plus commented “I am really proud of how we have managed to develop the Saint George’s Day celebrations in North Kent. The festivals are a great example of how the arts can be used to bring communities together and celebrate our shared values. I genuinely believe that other parts of the country can learn about how we use Saint George’s Day as a means of bringing diverse communities together as a symbol of unity.”