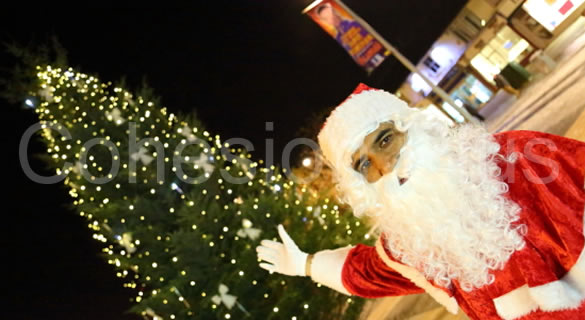 The Christmas Parade of Lights featured 14 local schools and some 600 children from across the Borough who benefited from workshops in the build up to the event which were delivered by Same Sky Arts along with a number of culturally diverse artists including the Premier Brass Band, Crocodile Style Brass Band, Four by Four Dhol Drummers and Bloco Fogo Samba. They were joined in the parade by parents and guardians of the young people taking part.

The Christmas Parade of Lights which was led by the Mayor of Gravesham Councillor John Caller and invited guests set off from Saint George’s Shopping Centre before going onto New Road, Windmill Street then climaxed on the Community Square with the spectacular Christmas lights being switched on along the route.

One of the highlights of the parade was the performance of the “Dancing Santa’s” who performed a special bhangra dance routine to Jingle Bells which had been produced jointly by Cohesion Plus and Four by Four Bhangra Dancers at the junction of New Road and Windmill Street. The Parade finished on the Community Square where there was entertainment by the cast of the Pantomime before the giant Christmas Tree was lit up by the Mayor of Gravesham and Jamie Foreman one of the stars of Aladdin.

Gurvinder Sandher who organised the Parade commented “The response that we had to the Parade was beyond what I expected. We are very lucky that the local schools are so committed to getting involved in local community events and our strong partnership with Gravesham Borough Council allows us to produce celebrations like this which bring all the communities together as one to celebrate not only the start of the Christmas festivities but also the values of friendship, respect and tolerance which unite us as citizens of the borough. I believe that what we have delivered here with this event is unique and is a model which could be replicated by other towns across the Country”