Some of the biggest celebrations for Saint George’s Day nationally will be taking place in Gravesham and Dartford on Monday April 23rd, bringing together diverse communities from the two boroughs to celebrate the Patron Saint of England. The festivities have been organised by Cohesion Plus in partnership with Kent Equality Cohesion Council supported by Gravesham Borough Council, Dartford Borough Council and Arts Council England.

Gurvinder Sandher Artistic Director of Cohesion Plus commented “We have had the privilege to organise some great Saint George’s Day celebrations in Gravesham and Dartford over many years and this year is no exception. I am always humbled by how well received the events are as it’s such an excellent example of communities coming together to celebrate our shared values. I genuinely believe that other parts of the country can learn about how we use Saint George’s Day and the arts as a means of bringing diverse communities together as a symbol of unity.”

In the build up to the day 21 local schools and some 1100 young people will benefit from creative arts workshops as they prepare for the parades which will be the highlight of the celebrations in the boroughs.

The celebrations in Gravesham will take place between 9.45am and 11.30am and in Dartford between 12.45pm and 2.30pm. Entertainment will include music from Premier Brass Band, Brass Volcanoes, Cohesion Plus produced ‘Folkin Fusion African and Asian Drumming Collective, West Hill Morris, and Saint George himself as well as a large scale dragon called Gwynhaff.

7 schools in Dartford and 14 schools in Gravesham are taking part in the celebrations. All the schools have been working with Same Sky Arts in the build up to the event. Gurvinder the Artistic Director has been organising the celebrations in North Kent since 2008 with a small team of volunteers 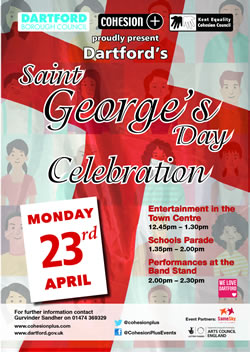 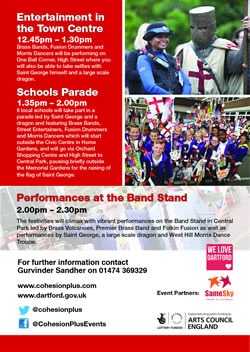 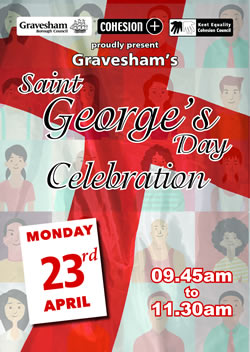 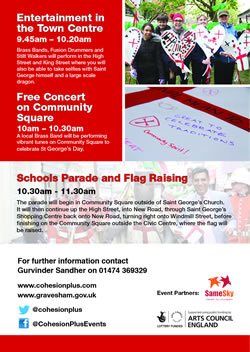