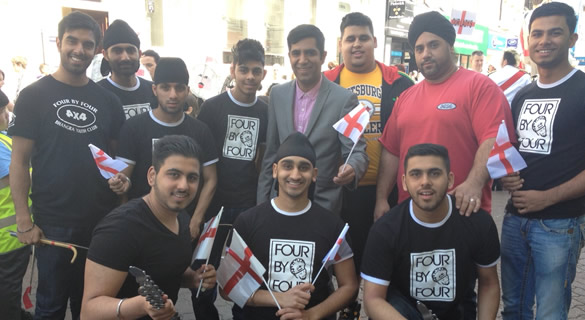 Over 1500 young people from 30 schools in Gravesham and Dartford will be taking part in community celebrations through Gravesend and Dartford town centres on April 23 to celebrate Saint Georges Day. The festivities has been organised by Cohesion Plus supported by Arts Council England and Kent Equality Cohesion Council in partnership with, Gravesham Borough Council and Dartford Borough Council’s in what will be some of the biggest celebrations taking place in England.

Work has been taking place in local schools over the last 8 weeks delivered by arts company Same Sky to prepare special visual arts and craft displays which will be used during the parade which will also feature the Premier Brass Band, West Hill Morris Dance Troupe, Four by Four Dhol Drummers, a Town Crier and a Saint George in full armor. The focal point of the parade will be a model of Saint George which has been made by some of the schools taking part.

The aim of the events is to celebrate the patron Saint of England and bring together the diverse communities in Gravesham and Dartford to celebrate this important day. The celebrations in Gravesham will take place between 10am and 11.30am and in Dartford between 7am and 9am at Dartford Train Station and then in the Town Centre between 12pm and 3pm.

Gurvinder Sandher the Artistic Director of Cohesion Plus who has been working on the celebrations for the past few months commented “I am very grateful for the support provided by our partners which has allowed us to organise some of the biggest celebrations for Saint George’s Day in England. We have worked very hard on the artistic side incorporating Brass Bands, Morris Dancers and Dhol Drummers into what we believe will be some very colorful and entertaining celebrations. I hope that the local communities in Gravesham and Dartford will come out and support the celebrations and wave the flag of Saint George.” 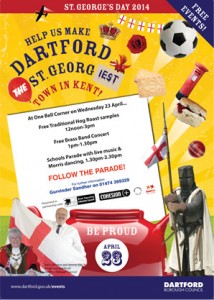 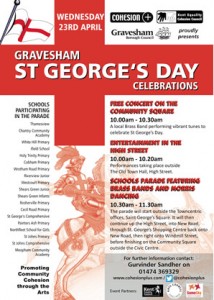