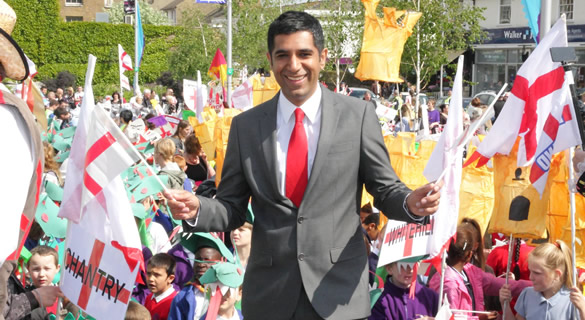 Cohesion Plus oversaw some of the biggest celebrations for Saint George’s Day in North Kent on April 23. Activity started at 7am when commuters at Dartford Train Station were greeted by the sight of a Brass Band and Saint George who provided entertainment while Cllr Jeremy Kite the Leader of Dartford Borough Council, the Mayor of Dartford Cllr Patsy Thurlow handed out Saint George’s Day themed goodies.

The focus then moved to Gravesham where entertainment started outside the Old Town Hall at 10am where the gathering crowds were able to enjoy performances by the West Hill Morris Group and the Premier Brass Band while on the Community Square the Salvation Army Brass Band starting performing.

Just after 10.30am led by a Saint George in full body armour 22 schools from Gravesham involving some 1000 children started the schools parade which also involved the Premier Brass Band, West Hill Morris Dance Troupe and Four by Four Dhol Drummers. The parade started outside Saint George’s Church before going up the High Street, into the Town Centre, through Saint George’s Shopping Centre and then via Windmill Street to the Community Square. The children were cheered along the way with the communities of Gravesham proudly waving the flag of Saint George. Once on Community Square the children were thanked by the Artistic Director of Cohesion Plus Gurvinder Sandher and Deputy Mayor of Gravesham Cllr John Caller before the flag of Saint George was raised.

According to Mandeep Suman from Four by Four Dhol Drummers “That was amazing, the atmosphere in Gravesend Town Centre as the parade went around was so positive with people waving their flags and cheering us all on. We were very proud to take part in this community celebration where the arts brought all the communities together.”

The celebrations then moved to Dartford where a traditional hog spit roast was set up on the High Street and had queues as soon as it opened at noon. Entertainment was provided by the Salvation Army Brass Band on One Bell Corner and the West Hill Morris Group performed for the large crowd that had gathered. The parade featuring 8 local schools and some 500 children proved to be a great hit with hundreds following the parade from the High Street to the Band Stand in Central Park where further entertainment took place before everyone was thanked by Cllr Jeremy Kite the Leader of Dartford Borough Council and the Mayor of Dartford Cllr Patsy Thurlow.

Gurvinder Sandher the Artistic Director of Cohesion Plus commented “This was an excellent example of how the arts can bring together diverse communities both young and old. I was overwhelmed with how well the day went; the months of preparation and planning were all worth it to see the joy on people’s faces. I am very grateful to Same Sky for their fantastic work in the local schools and all the artists who performed and made the day so memorable. Over 1500 young people benefited from artistic workshops in the build-up and what they created and showcased in the parade was of a very high standard. As ever I am very grateful to Arts Council England for their on-going support which allowed us to turn our artistic vision into a reality.”

Over the 3 events it is estimated that over 5000 people were able to enjoy the Saint George’s Day celebrations which were organised by Cohesion Plus and Kent Equality Cohesion Council in partnership with Arts Council England, Gravesham Borough Council and Dartford Borough Council.