Preparations are now at an advanced stage for some of the biggest Saint George’s celebrations in the South East taking place in Gravesham and Dartford on Saint George’s Day itself Tuesday April 23rd. This year 22 local schools across the 2 boroughs have been taking part in arts workshops run by arts organisation Same Sky in the lead up to the parade and will display what they have made during the parade itself. The ethos of the event is to celebrate diverse England in the context of 2019 and to educate young people about Saint George the patron Saint of England.

Gurvinder Sandher the Artistic Director of Cohesion Plus commented “At a time of great division in our country I believe that it is important that we celebrate events like Saint George’s Day as there is more that bind us together as communities than divides us. I am very proud of what we have achieved over the last 10 years in Gravesham and Dartford with the celebrations and I hope like previous years that the local community will come out and wave the flag of Saint George with pride. The young people from Gravesham and Dartford who will participate in the parade have been working very hard over the past few months in preparation and this is a great example of how the arts can be used to bring people together.”

The celebrations in Gravesham will take place between 10am and 11.30am and in Dartford from 12.30pm to 2.30pm. Entertainment including Big Fish Brass Band, DDFK and Premier Brass Bands, West Hill Morris, Hartley Morris Men, Saint George’s themed Stilt Walkers, a Saint George in full armor and a large scale dragon will feature. 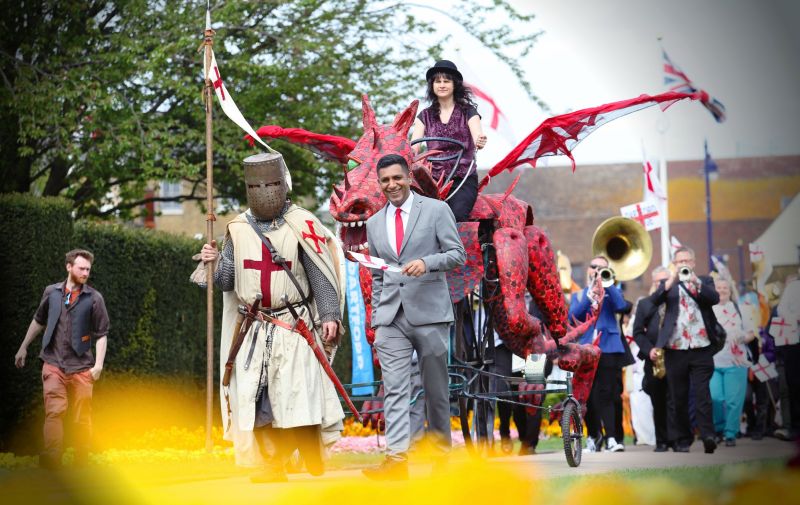