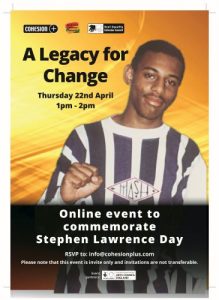 Cohesion Plus working in partnership with North Kent Caribbean Network and Kent Equality Cohesion Council have arranged an online event on Thursday 22nd April between 1pm and 2pm to commemorate Stephen Lawrence Day.

Stephen Lawrence Day was first celebrated in 2019 and takes place annually on 22 April, the date of Stephen’s death. The Day is marked officially in the British calendar as a celebration of Stephen’s life and legacy.

One of the highlights of the event will be the premiere of a spoken word project commemorating Stephen Lawrence produced by GTown a Gravesham based music collective led by Jimmy Babalola (also known as Bones) and Ihsan Ahmed (also known as Vybes) which has been commissioned by Cohesion Plus who have acted as one of their mentors over the past 2 years.

Gurvinder Sandher Artistic Director of Cohesion Plus commented, “Stephen’s death was a catalyst for significant change in the UK and it is vital that we continue to shed light on past mistakes so that we can move forward positively. We are incredibly proud to have commissioned GTown to create this powerful track. It is imperative that talented, young diverse people have a place to voice their concerns as well as their creativity. I am also very grateful to our principle partners the North Kent Caribbean Network and Kent Equality Cohesion Council for working with us to make important events like this possible.”

Jimmy Babalola, Founder of GTown commented, “We are really proud to be releasing this project on Stephen Lawrence Day. Our work is built around young people and specifically young boys and men who look like Stephen, who have grown up like Stephen and have similar backgrounds. We know how important it is to remember past tragedies so that the youth can pay tribute and also move forward to help make meaningful change. I am thankful to Sean Alayo and Pastor Ajay, the amazing artists who worked with us on this project as well as Nedim Nazerali who directed the video. I am also thankful to Cohesion Plus for providing this important platform, in giving these young people a creative outlet and stage to amplify their voices.”