Following its success last year Cohesion Plus and Kent Equality Cohesion Council working in partnership with Swale Borough Council have arranged the second Swale Fusion Festival of Light which will be taking place on Friday October 12th.

Workshops have taken place in 8 local schools to create lanterns around core values of respect, excellence, friendship and equality which have been delivered by Same Sky Arts and Ideas Test. The lanterns will be carried by the young people in the colourful parade which will be the focal point of the festival.

A programme of culturally diverse entertainment will start on Sittingbourne High Street at 6pm with performances from Cohesion Plus’s Folkin Fusion Drumming Collective, Bloco Fogo Samba and the Stilt Batteristas as the young people prepare for the parade.

The parade is due to start from outside Wilko at 6.30pm and will be led by guests including the Deputy Lord Lieutenant Mr Paul Auston, Board Members of Cohesion Plus and the leader of Swale Borough Council Cllr Andrew Bowles. Accompanied by the musicians the parade will go down the High Street through Roman Square before finishing at Albany Park. The park will be transformed for the evening with special light installations where the festival will climax with a firework display at 7.15pm.

Gurvinder Sandher the Artistic Director of Cohesion Plus commented “We are really pleased to be working in Swale again and are looking forward to putting on another colourful community festival which brings together the local communities through the arts and celebrates our shared British values. This is an important area for us to work in as the area traditionally has low levels of engagement therefore we are particularly pleased to be working with local arts organisations such as Ideas Test to increase access to great arts centered events in the heart of Swale.” 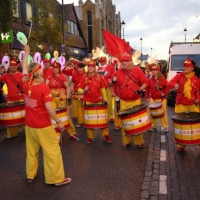 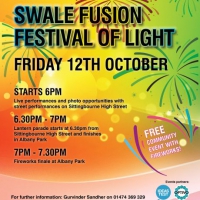 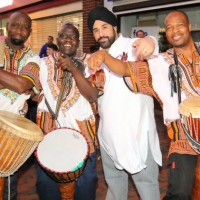 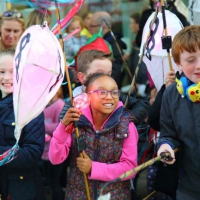 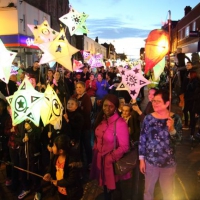