After the huge success over the last 2 years, the Swale Fusion Festival of Light is set to return to Sittingbourne Town Centre on Friday 11th October. The festival which is organised by Cohesion Plus and Kent Equality Cohesion Council working with Swale Borough Council uses the arts to bring communities together and celebrates the values of respect, excellence, friendship and equality.

A programme of culturally diverse entertainment will start on Sittingbourne High Street at 6pm with performances from Cohesion Plus’s Folkin Fusion Drumming Collective, Bloco Fogo Samba and the Fat Cat Brass Band as the young people prepare for the parade. A special surprise guest will also be attending in the shape of Oscar the Fox, a mobile arts installation which will be lit up and interacting with the crowds.

The parade is due to start from outside Wilko at 6.30pm. Accompanied by the musicians, the parade will go down the High Street through Roman Square before finishing at Albany Park. The park will be transformed for the evening with special light installations where the festival will climax with a firework display at 7.15pm.

In the build-up lantern making workshops have taken place in 13 local schools and they climaxed on Saturday 5th October with a special community workshop at Ideas Test on the High Street. In total, over 600 young people have benefitted from the activity in Swale including 60 participating at the free lantern workshop on Saturday. The workshops were delivered by Same Sky, Big Fish Arts and Ideas Test.

Gurvinder Sandher the Artistic Director of Cohesion Plus commented “I am incredibly proud to be returning to Swale to deliver such a vibrant and important event which brings together the local communities through the arts and celebrates our shared British values. This is an important area for us to work in as the area traditionally has low levels of engagement therefore we are particularly pleased to be working with local arts organisations such as Ideas Test to increase access and participation in the arts.” 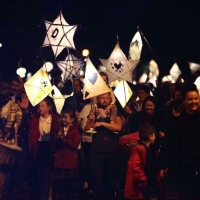 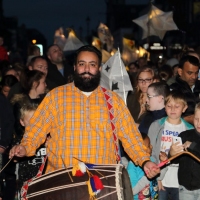 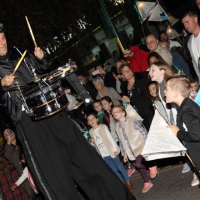