The 10th Tunbridge Wells Mela Festival which celebrates the diversity of the borough through music, food and dance will be taking place on July 19 at the Calverley Grounds between 12pm and 6.30pm. The Mela has been organised in partnership by Cohesion Plus Kent, Sue Latham Events and the Kent Equality Cohesion Council with the support of Arts Council England.

Alongside the exciting stage programme there is also going to be a creative arts zone where LV21 Arts will be delivering workshops and an interactive show by Eric Maclennan “Voyage around my Bedroom”, Nutkhut will also be performing with their special stilt walkers who will get the audience up, laughing and dancing.

Gurvinder Sandher the Artistic Director of Cohesion Plus commented “This is our 10th and maybe our last Mela in Tunbridge Wells due to on-going funding issues and we wanted to go out with the bang. We have great entertainment on and off stage and I believe this is our most ambitious artistic programme to date. I hope the communities of the borough and will come out and support the event like they have done previously.” 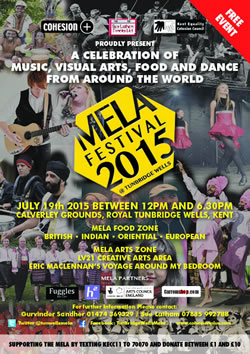