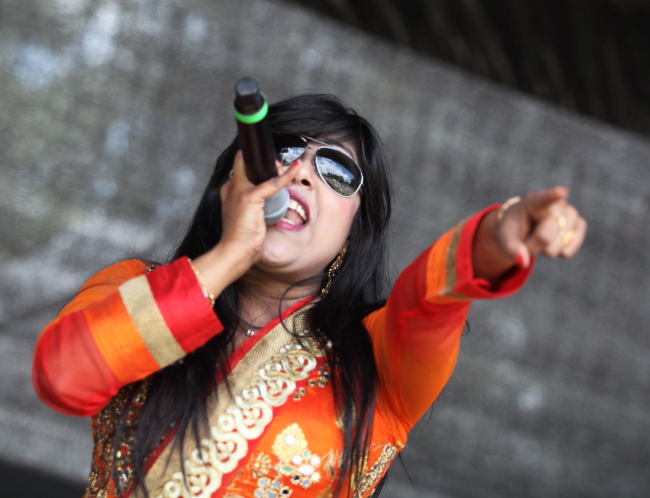 The 10th Tunbridge Wells Mela Festival which celebrated the diversity of the borough through music, food and dance at Calverley Grounds proved to be popular with the local community. The Mela was organised in partnership by Cohesion Plus Kent, Sue Latham Events and the Kent Equality Cohesion Council.

In addition the Cohesion Plus co-produced performance “Samba Bhangra Beats” which featured the Bollywood Brass Band, Bloco Fogo Samba, Samba Reggae Dancers and Four by Four Bhangra proved to be very popular with the audience.

Alongside the exciting stage programme there was also a creative arts zone where LV21 Arts put together the Changing Audiences piece of art, with members of the public dressing up wooden models to create an additional audience. While Eric MacLennan’s new piece of work “Voyage around my Bedroom “also proved to be very popular with people queuing to take part. In addition the popular Nutkhut Stilt Walkers had the audience up, laughing and dancing throughout the day.

Gurvinder Sandher the Artistic Director of Cohesion Plus commented “This was the 10th Mela that we have organised in partnership in Tunbridge Wells and I feel it was the most biggest and successful to date. I am very humbled by the support of the local community and the excellent reception we received on the day made all the efforts worthwhile. If this does prove to be the last Mela that we are involved with in Tunbridge Wells I am glad that we went out on such a positive note. I felt the artistic programme on and off stage was very strong and the support from Arts Council England and local community partners needs to be commended without which there would have been no Mela. ”

Sue Latham from Sue Latham Events commented “The Mela is a unique event in Tunbridge Wells and the support for it is as strong as ever as this year has shown. I am really proud of what has been achieved on such limited resources.”