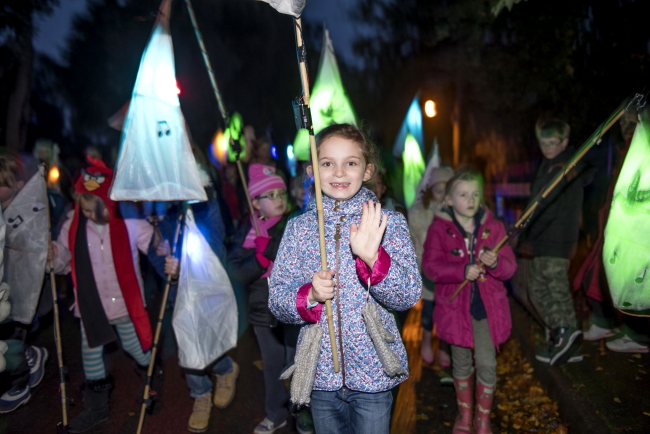 The 3rd Wrotham Festival of Fusion and Light proved to be popular, with music and lights bringing the historic village to a standstill.

The Festival featured 4 local schools; Saint George’s, Platt, West Malling and Trottiscliffe Primary Schools who worked with Same Sky Arts who had been commissioned by Cohesion Plus to create colorful lanterns for the parade. The schools were joined in the parade by the Bollywood Brass Band and Bloco Fogo as well as street entertainers Payne and Pearce and colorful stilt walkers led by Will Parsonage. The Mayor of Tonbridge and Malling Cllr Boldock and local MP Tom Tugendhat were at the front of the parade as it went through the village.

Once the parade reached the Wrotham Cricket Ground the Fusion element of the Festival started and the audiences were not only able to see spectacular light installations created by Same Sky but also culturally diverse performances by Bloco Fogo Samba and the Bollywood Brass Band as well local artists Mark Lees and comedy duo Payne and Pearce. The festivities were climaxed by a spectacular fireworks show which had been created by the award winning Phoenix Fireworks.

According to Gurvinder Sandher the Artistic Director of Cohesion Plus “I would like to thank all our partners and the young people for their hard work which made the Festival such a success. It is a great tribute to all involved that despite the poor weather the audience stayed to the end, and people left with smiles on their faces. We were very ambitious with what we wanted to deliver artistically this year and am pleased that working with Same Sky and the performing artists that we were able to. This event is a great example of how the arts can be used to engage with communities in a rural setting.

The Festival was organised in partnership by Cohesion Plus, Kent Equality Cohesion Council, and the schools in the Pilgrims Way Partnership working with Tonbridge Malling Borough Council, Wrotham Parish Council and supported by Arts Council England.